Book Review to accompany one of our upcoming films September 29, 2014 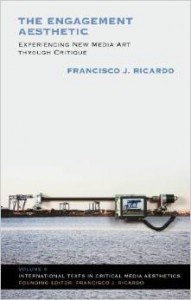 Hello! As I may have mentioned, we don’t like to be bored here. Francisco’s book,
The Engagement Aesthetic is filled with still images depicting the new media art he is discussing. So, it made perfect sense to make a film based on the book, where the art, which almost always requires some form of the moving image to activate it, could be even better represented.

Here is a very thoughtful review of the book from Elizabeth Mix of Butler University:

Ricardo (art theorist and documentary film producer) wisely avoids pitfalls associated with new media: the fast-changing nature of the technology that underpins it, and an unlimited array of possible examples to discuss. Instead Ricardo focuses both on the experience that new media provides and its critical difference from earlier, specifically object-based, or “modern,” forms of art. The book’s title might mislead potential readers, as Ricardo’s work is not really about aesthetics per se; nor does it fit into the category of art criticism. Rather, the author posits that digital media inspire an interaction with an audience, and that this engagement can be productively explored through the artistic process of critique (an open-ended and reflective process of exploration that begins with the senses and avoids judgments). Each aesthetic property identified (e.g., metonymy, performativity, reflexivity) is linked both to art history and theory (including Merleau-Ponty, Bakhtin, Barthes, Benjamin, Habermas, and others). Despite the weightiness of the material, the short-chapter structure and restrained use of jargon makes this volume surprisingly accessible. While this volume’s most obvious use is as a textbook for a graduate-level course in new media theory, it may find a wider audience among practicing artists. Summing Up: Recommended. Graduate students through professionals/practitioners.
–E. K. Mix, Butler University

Watch for some sneak footage of this film to come soon! Have a great day! 🙂