It’s Media Monday on Tuesday again, and today’s short, powerful film discusses the journey we all must take to find our path in life. Often, it takes us far from what we know and are familiar with – what may be safe, but not true to ourselves. And too often for many people, they are dispossessed of their homes, their countries, for a variety of reasons, and find they have no choice but to seek a new path for themselves. Please enjoy this video, and subscribe to our YouTube channel, Conceptualist Films

Hello! It’s Wordsmithing Wednesday, and we are working our words around sculpture. It’s everywhere, from parks to college campuses – not something simply to be viewed in a museum, but to be wondered at in most public spaces. Sculpture seems to be getting harder to define as the decades progress, until the question arises – is it possible to sum up modern sculpture? In a film full of incredible examples, Francisco traces three trends showing how (1) massive blocks became seemingly “moving” projections; (2) depth became compressed into flatness; and (3) the creative process and its medium became a singular phenomenon. Deep theory, lots of works, an amazing ride!

Hello!It’s Friday again, and while we are no strangers to hearing about (or being around) violence from gangs, there is perhaps one area where a turf war seems incredible, harking back to the good old days of running after an ice cream truck, its familiar call promising to chase away the summer heat with an ice cream treat. But all was most definitely not as it appeared. In this short film, we learn the dangerous truth beneath the mild vanilla exterior of the ice cream truck business. Enjoy!

Hello! I decided to deem today as Fashion-Forward Friday. They say that in difficult times, fashion is always outrageous. Not surprisingly then, Francisco’s short film looks at new directions transforming the fashion system into a media platform. Enjoy!
https://youtu.be/XoCB_NljyA8&w=700&rel=0

END_OF_DOCUMENT_TOKEN_TO_BE_REPLACED Comments Off on The Future is Now in Fashion – Techstyle at the MFA, Boston
Categories: avant-garde Commentary Experimental Film New Media

Hello, and welcome to a later edition of Media Monday on Tuesday! Not all stories are narratives, and not all narratives are stories (think of dreams, for example).  In this engrossing work by Francisco, can you tell which kind it is? Travel down the rabbit hole and offer an interpretation for this rich procession of images. It’s all there.

Happy Sunday, everyone! The festival is getting into full swing now, and runs through the coming week with well over one hundred films being screened in all genres. Our film, F For Franco, will screen on Wednesday, February 24th. Each day, I will be posting some material to give a sense of the visual journey the viewer will enjoy in watching F For Franco. Here is a short film to get you started:

Hope to see you there, enjoy the rest of your weekend! 🙂

Confusion of the Creative Crisis February 17, 2016

“I think they’re trying to save him,” says one of the agents in the movie, The Matrix. ‘They’ are Neo and Trinity, and ‘him’ is their friend and leader Morpheus, and with this line, we are ushered into a rooftop battle and famous helicopter scene, where the big, powerful gun destroys the office where Morpheus is being held. You might ask, what does this scene have in common with Fellini’s 8 1/2? How can they be compared? There’s possibly nothing to connect them, but in this short “mashup”, Francisco takes a look and adds a third layer of creative confusion into the mix. I have my thoughts – what do you think? Could a tangible connection be made between these two things? Is every aspect of a film based on a conscious decision for a certain effect, or are some done on a whim? And why juxtapose these two things together? That’s the fun (if fun it can ever be) of the Creative Crisis. Enjoy!

Happy Media Monday on Tuesday! I think it’s fair to say that throughout the ages, as the notion of what is art has become more and more expansive, the idea of sculpture has remained rather steady, in our minds if not in strict definition. It’s an object you see in a museum, in a park, in a house. A static prop used in a theatrical production, not part of the production itself. And yet, as far back as 1924, sculpture began to embrace movement, light, and sound, and it brought new life to many kinds of performance, including the rock concert, carving out a new future for itself. In this short film, Francisco takes us on a journey through the evolution of sculpture as it relates to performance. Enjoy!

It’s Thoughtful Thursday, and finds us in Winona, MN. Francisco is speaking at Winona State University at the invitation of another former student of his at RISD, Miguel Elizalde, a member of the faculty at WSU. Miguel and professors from other disciplines are working together to create an interdisciplinary program called Digital Humanities. Francisco will teach a class in the afternoon to film students – discussing Orson Welles’ F For Fake and our own F for Franco, and present in the evening. The campus is beautiful, and ready to launch a new department! 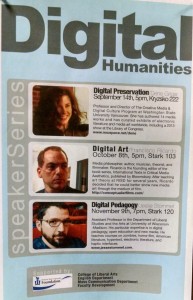 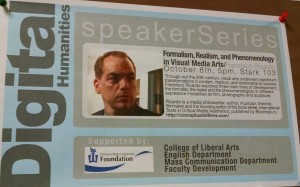 Hollywood, FFF, and Many Thanks to the Festival October 7, 2015

Hello and Happy Tuesday to you! It’s so strange that two weeks ago today, the Hollywood Film Festival, held at the ArcLight Cinemas, got under way. It was a new era for the festival, looking to change HFF’s direction, to let great films and little-known filmmakers have a chance to show their work. This article from the LA Times discusses the vision of Brad Parks and Rod Beaudoin for the Hollywood Film Festival:

Our film screened on Thursday night, with an introduction before and spontaneous Q & A after the film by Francisco; a few days later, Neon Tommy – a large, student-run news organization that is part of USC-Annenberg (http://www.neontommy.com/annenberg-digital-news.html), gave F For Franco this review:
https://medium.com/neon-tommy/film-review-f-for-franco-ac92640b0fa6

The festival was a wonderful experience (speaking from New England experience,the weather was fantastic for late September!), and we at CF thank Brad, Rod, the HFF team, and Linda Brown for realizing their mission to “Incite, Inspire, Inform” the Future of Hollywood! I believe our film embodies all three.

END_OF_DOCUMENT_TOKEN_TO_BE_REPLACED No Comments on Hollywood, FFF, and Many Thanks to the Festival
Categories: avant-garde documentary Electronic music Experimental Film New Media