Hollywood Reporter Review is in and is Positive, Thoughtful November 27, 2014 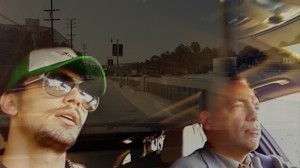 Hello, everyone! It’s almost Thanksgiving in the US, and the start of a crazy holiday season. Here on the West Coast, it’s a very balmy day, for which I am very thankful. All too soon we’ll be back on the East Coast and into winter, despite the calendar. However – how can that dampen our spirits here at CF?

Sunday, November 17th we screened F FOR FRANCO at the NoHo Arts Center in North Hollywood. It was very well-received and the Q & A with Francisco after was filled with thoughtful questions about the ideas presented in the documentary, or film essay. The very next day a thoughtful, and very positive review came out in The Hollywood Reporter, which is posted below. It’s the kind of review everyone wants for their film, and especially their first, very experimental conceptual film.

As with anything new, not everyone is going to like it. The review contains a few negative comments about the film, mostly directed at Francisco being an unknown director. But everyone is unknown at first – you have to start somewhere. Everyone is entitled to their opinion, and this film is not for everyone. You have to be willing to take the ride to the end, to listen and realize you are not looking at a “normal” film at all. If you find you don’t like it, that’s fine – no one loves every film. One person walked out before the end and the Q & A, so we don’t know how much he/she actually saw, and in so doing – People’s Critic” missed a chance to ask Francisco questions about his process of directing, about the interviews/conversations with James, etc.

BUT, the review, the positive comments at the screening, and in the review’s comments as well, show us one thing – Conceptualist Films has Arrived With a New Brand of Film! For those who like the experimental in style and in concept – this film’s for you.