Hello! It’s Thoughtful Thursday, and we have some catching up to do. I was perusing the Hollywood Film Festival website to do some Wikipedia updating, and discovered this photo on our film’s page from the red carpet event the night of F For Franco’s screening. Francisco and I are with the festival’s independently-minded directors Brad Parks and Rod Beaudoin:

When the festival was over, we flew out to Winona,MN – it was my first trip to the Midwest that is Minnesota, and it was beautiful. We were in a small rural town, and the leaves were just changing their colors: 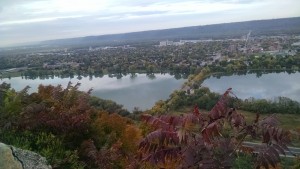 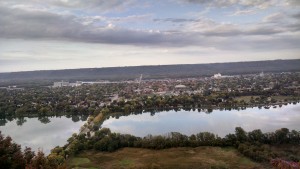 We were there, as the last post indicated, for Francisco to give a class lecture and an evening presentation to usher in a new, interdisciplinary Digital Humanities department at Winona State University, at the invitation of Miguel Elizalde, another former student of his at RISD, now an Assistant Professor at WSU. Naturally, the class and the presentation focused on new media art and film. The students and those attending the lecture were able to watch some sections of F For Franco as part of a discussion on the creative possibilities of film when one doesn’t limit oneself to one particular structure, form, or technique. Experimentation with ideas, form, and visual representation are the ways to move art and film forward, and avant-garde doesn’t have to mean inaccessible or boring. One needs only to be a little quiet and attentive and give the film or artwork a chance to wash over you. Having recently watched 2001:A Space Odyssey for the first time – if ever a film asked for some patience…! 🙂

F For Franco takes its inspiration from the title of Orson Welles’ masterful piece of film editing in F For Fake. This film discusses three fakers, really – Elmyr de Hory, the greatest art forger of the 20th century, Clifford Irving, his ‘biographer’, and Welles himself. Elmyr lived for a time on the island of Ibiza, and in the late 1960’s a young man travelling through Europe named Mark Forgy became Elmyr’s friend and assistant up until Elmyr’s death. Francisco reached out to Mark, and in one of those events that only seem to be real in novels or films, we were able to meet him and his wife before the lecture at WSU, and return with them to their home in New Prague to begin filming a new project. More on that later (soon!). Here is a photo of Francisco and Mark discussing how Mark came to be in F For Fake, with the film version of Mark in the background:

The new project deserves its own post, but what a three-week adventure!Take care!