Hi everyone! Media Monday is nearly over in my time zone, but I might squeak it in. Technically, you’re supposed to utter Rabbit! Rabbit! on the first of each month – the first words you say of the month, as well. Why? According to British tradition, it will bring good luck for the whole of the month. Not a bad deal, IF you can remember to do it before you say something else. 🙂

We’re excited to announce that F FOR FRANCO will be screening on Sunday, November 16th at 7pm at the NoHo Arts Center in North Hollywood! It’s a great chance to view the film and give us some feedback. If you’re going to be in the area, please call 818.508.7101 if you’re interested in going to see it. There will be a Q & A session afterward with the director (obviously, Francisco) to further discuss the ideas presented in the film. 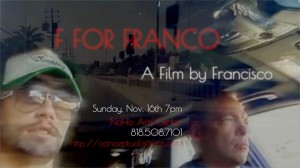 And for your media bit, a leftover from last week’s Facebook post – a full track from Soundcloud instead of a sample (no video this time, though) – https://soundcloud.com/conceptualist/adding-and-subtracting

You can buy the track or the album from the player on the website, or Amazon or iTunes. More soon!